Are Fijians really happier about their lives than Australians?

This might be an appropriate question to consider on Australia Day.

My attention was aroused when I saw the headline “Global happiness survey shows Fijians are the world’s most content”, because I hadn’t previously seen any happiness data for Fiji. The headline refers to a survey of 65 countries recently conducted by WIN/Gallup. (The Gallup organisation involved is not the one that conducts the Gallup World Poll.)

When I looked further I found that the survey also has happiness data for Papua New Guinea, which shows that people in that country also tend to be relatively happy. By contrast, Australians appear to be relatively unhappy.

The question asked in the survey was: “In general, do you personally feel very happy, happy, neither happy nor unhappy, unhappy or very unhappy about your life?” I have constructed the average happiness ratings in the accompanying Figure by assigning a score of 5 to “very happy”, 4 to “happy”, 3 to “neither happy of unhappy”, 2 to “unhappy” and 1 to “very unhappy”. 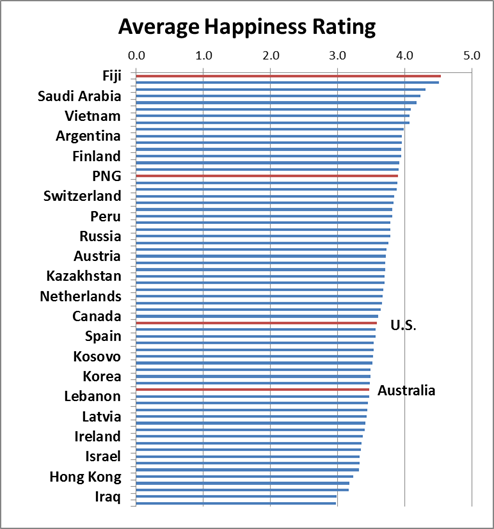 I am not sure what to make of the rankings shown in the Figure because they seem to be difficult to square with the findings of other happiness surveys. This may be because the survey question is interpreted differently in different parts of the world.

A central issue, it seems to me, is whether the question is more likely to evoke emotional responses or responses that involve some cognitive input. John Hall and John Helliwell, who have expertise in happiness research, leave no doubt that they believe survey participants respond differently when asked how happy they are than when asked how happy they are with their lives:
“As has been shown in the first and second World Happiness Reports, respondents to surveys recognize the difference between happiness as an emotion and happiness as a judgment about the quality of life as a whole. The responses of individuals to these different questions are highly distinct. A very poor person might report himself to be happy emotionally at a specific time, while also reporting a much lower sense of happiness with life as a whole; and indeed, as we show later, people living in extreme poverty, whether in terms of income or social support, do report low levels of happiness with life as a whole”.

The WIN/Gallup survey appears to be asking people how happy they are with their lives, but it doesn’t seem to be interpreted that way. I used regression analysis in an attempt to explain the findings in terms of Gallup World Poll data on “life evaluation” (relative to the best and worst possible life) and “happiness yesterday”. The analysis was conducted for 60 countries for which some matching data was available. The analysis was not very successful in explaining the WIN/Gallup data: it suggested a positive relationship with the happiness variable and no relationship with the life evaluation variable.

On Australia Day it might be worth thinking for a moment about the kind of response you are likely to get from an Australian if you ask: “In general, do you personally feel very happy, happy, neither happy nor unhappy, unhappy or very unhappy about your life?”. I expect it would be common to get a response something like: “I’m happy enough about my life, I suppose”. The surveyor interprets that to mean that the respondent is “happy”, whereas the respondent might actually feel very happy about his or her life, but reluctant to appear exuberant unless intoxicated.
Posted by Winton Bates at 12:17 PM

Email ThisBlogThis!Share to TwitterShare to FacebookShare to Pinterest
Labels: Well-being measurement issues, What is happiness?