What is so good about 'Send Round the Hat?'

‘Now this is the creed from the Book of the Bush--
Should be simple and plain to a dunce:
"If a man's in a hole you must pass round the hat--
Were he jail-bird or gentleman once." 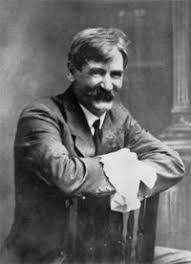 Henry Lawson, a renowned Australian bush poet and story teller, used that verse to begin his story, ‘Send Round the Hat’. The story is based on his experience in the Bourke district of New South Wales in the early 1890s and would have been intended to be read mainly by Australian pastoral workers.

I came to re-read the story a month or so ago when I was asked to recommend some historical references for an Argentinian visitor who was interested in the cultural tradition in rural Australia of people sticking together and supporting each other in this vast harsh land. I suggested that ‘Send Round the Hat’ was excellent.   The comment that came back was: ‘Not necessarily that easy for an Argentinean to understand!’
That response is fair enough. There are probably a lot of Australians who would also struggle to understand English as it was spoken in rural Australia in the 1890s.

Some people might even struggle to understand the message of the poem quoted above. A person who is ‘in a hole’ is in a difficult situation, often involving a financial problem. To ‘pass round the hat’ is to ask people to donate money to help the person concerned – traditionally, by asking them to place a contribution into a hat. The message is to be kind to people who are in difficulty, irrespective of their background.

The storyline is very simple. The author presents a series of anecdotes to explain how Bob Brothers (more commonly known as the Giraffe or Long-‘un because he was tall) has gained a reputation for passing around the hat to help others. He tells us that Bob is always the first to make a contribution when he passes around the hat and that he sometimes has to borrow money in order to do this. The story ends with Bob’s friends stealing his hat and passing it around to raise money to help him on his way back to Bendigo in Victoria to marry the girl he loves.

The story is brought to life by Lawson’s description of the characters involved and their attitudes. Most regard Bob Brothers as a nuisance, or pretend to. One of the characters, Jack Mitchell, is even permitted to suggest that Bob is ‘is one of those chaps that is always shoving their noses into other people’s troubles’ because of ‘vulgar curiosity and selfishness’. According to Jack’s theory, Bob makes his collections because he is ambitious and likes public life.

Fairly early in the story, Lawson has Bob explain his philosophy as follows:
"The feller as knows can battle around for himself," he'd say. "But I always like to do what I can for a hard-up stranger cove. I was a green-hand jackeroo once meself, and I know what it is."
Bob was saying that he does what he can to help strangers in need because he knows what it is like to be one. The ‘feller as knows’ would have a great deal of local knowledge and networks to support him. A ‘hard-up stranger cove’ is a stranger with little money. A green-hand jackeroo is an inexperienced worker in the pastoral industry.

The main reason why I consider ‘Send Round the Hat’ to be excellent is because Lawson is using the story as a gentle way to suggest to his readers that kindness involves helping strangers as well as your mates (friends and people you know well) and fellow members of trade unions, religions and ethnic groups.

The anecdote that makes the point most strongly, in my view, is the description of Bob’s attempt to take around the hat for the benefit of a sick Afghan camel driver:
‘Some years before, camels and Afghan drivers had been imported to the Bourke district; the camels did very well in the dry country, they went right across country and carried everythink from sardines to flooring-boards. And the teamsters loved the Afghans nearly as much as Sydney furniture makers love the cheap Chinese in the same line. They love 'em even as union shearers on strike love blacklegs brought up-country to take their places.
Now the Giraffe was a good, straight unionist, but in cases of sickness or trouble he was as apt to forget his unionism, as all bushmen are, at all times (and for all time), to forget their creed. So, one evening, the Giraffe blundered into the Carriers' Arms--of all places in the world--when it was full of teamsters; he had his hat in his hand and some small silver and coppers in it.
"I say, you fellers, there's a poor, sick Afghan in the camp down there along the----"
A big, brawny bullock-driver took him firmly by the shoulders, or, rather by the elbows, and ran him out before any damage was done. The Giraffe took it as he took most things, good-humouredly; but, about dusk, he was seen slipping down towards the Afghan camp with a billy of soup.’

The point being made was that Bob was even prepared to pass the hat around among bullock-drivers - a notoriously tough and profane group - asking them to make a contribution for the benefit of an economic competitor belonging to a different religious and ethnic group.


‘Send Round the Hat’ might not be great literature, but it makes some important points about the inclusiveness, or otherwise, of Australia’s cultural heritage of supporting people in need. After re-reading it I am still of the view that the tradition of passing around the hat has always been largely about ‘looking after your mates’. However, I greatly admire Henry Lawson’s attempt to promote higher ideals.
Posted by Winton Bates at 5:02 PM

heard it for the first time here

As an Argentinean that wants to make a living out of the English language, I read this short story at university. Even though I understood it, reading your comments about it has been not only useful, but also refreshing. It makes me feel that the impression the author tried to give is not that far from reality.
Thank you

Thanks for your kind comments Valeria.