Why do Australians want to stop the boats?

There are some questions that I have tended to put in the too hard basket because I don't have answers for them. The problems of refugees and the attitudes of Australians toward people seeking asylum in this country fall into that category. So, what I am about to write doesn't reflect any deep insights. The main message I would like to convey is that all humans deserve the opportunity to live happy and meaningful lives. People become refugees primarily because they are not free to flourish.

The number of people who come to Australia each year on refugee boats is apparently now greater than at any time since the Vietnam war. Nevertheless, as Julian Burnside, QC, pointed out in a presentation in September last year, the rate at which boat people have been coming here in recent years represents a tiny annual increment to Australia's population – about a quarter of one percent.

It is fairly obvious, however, that a high proportion of Australians want to stop the refugee boats and that the main political parties in Australia are competing to establish who has the best policies to do this. That means, I think, that those who would like their fellow Australians to do more to help refugees need to be sure that they understand why so many of us want to stop the boats.

In the paper just referred to, Julian Burnside expressed the following view of why Australians want to stop the boats:
'Xenophobia lies just below the surface in most Australians, and it is easily scratched, and politicians who are cynical enough are willing to scratch it to the surface and then exploit it for their own political end'.

If that had been said about Australian attitudes 30 or 40 years ago I would have had no difficulty in agreeing. Less than 50 years ago, xenophobia was very much on the surface in this country. In the first half of the 20th century the level of xenophobia in Australia must have been among the highest in the world. How else could anyone explain the support of the majority of the Australian people for the government's shameful history of using a dictation test in the most cynical and offensive manner imaginable to exclude non-white immigrants?

However, recent evidence on Australian attitudes seems to me to suggest that, in general, people in this country are no longer particularly fearful or hostile toward foreigners.  A fact sheet on public attitudes toward asylum seekers, based on a survey by the Scanlon Foundation conducted in 2012, suggests that about three-quarters of Australians feel positive about refugees who have been assessed overseas and found to be victims of persecution coming to live in Australia as permanent or long term residents.

The negative attitude toward boat people seems to be associated with scepticism about their motives for coming to Australia. Responses to an open-ended question on this topic suggest that Australians more commonly perceive that boat people are coming in search of a better life, rather than fleeing persecution or driven by desperation.

Julian Burnside suggests that the negative public attitude toward boat people could be turned around by courageous political leadership. He suggests that we need leaders to stand up and say:
'These people are running for their lives. They're doing nothing wrong. They're doing what you would do. We've got the space, we've got the wealth to make them safe. Let's do that'.

I think it would be good if more political leaders said that kind of thing. But I don't think it would do much to change attitudes toward boat people. It is possible to recognize that boat people are fleeing persecution and driven by desperation and still to regard them as queue jumpers - and to be concerned to avoid encouraging more refugees to take the risk of putting their lives in the hands of the people smugglers. 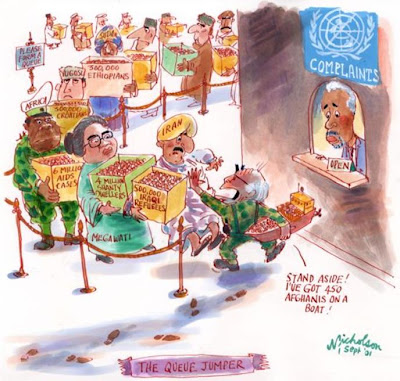 Cartoon by Nicholson from “The Australian” newspaper:www.nicholsoncartoons.com.au

I have to admit that I am sympathetic to such concerns, even though I know that the queue metaphor is not appropriate. As Fr. Frank Brennan has pointed out, in some parts of the world (like Pakistan) 'there is only mayhem'. The Hazaras fleeing from Afghanistan via Pakistan may not perceive that they have the opportunity to join an orderly 'queue' with a predictable waiting time, even after they reach Indonesia and are given the opportunity to have their claims processed. Nevertheless, it seems to me to be undeniable that those who choose the hazardous option of coming to Australia on an over-crowded and leaky boat are seeking an advantage over similarly placed persons who wait in Indonesia in the hope that they will eventually be allowed to come to Australia.

So, that kind of reasoning leaves me in support of a 'no advantage' policy. Unfortunately, however, the 'no advantage' policy that the government foreshadowed last year, with the re-introduction of off-shore processing in Nauru and PNG, hasn't stopped the boats. That is probably because boat people perceive the 'no advantage' rule, as currently applied, to be a bluff. They may think that the Australian government lacks the resolve to maintain a 'go slow' policy in processing their claims – and if so, they are probably correct.

As noted at the outset, I don't have any deep insights to present. I doubt whether we will be able to stop the boats until we are able to negotiate an appropriate bilateral arrangement with Indonesia, whereby the Indonesian government allows boat people to be returned to that country for processing, in exchange for Australia's agreement to contribute to accommodation and processing arrangements, and to provide an increased quota of resettlement places from Indonesia. As Frank Brennan says:
'We need to set up a workable, transparent, honourable queue in Indonesia'.

If such a solution is possible it will probably require a substantial increase in our total refugee intake. But I don't think that a future government would have huge problems in gaining public acceptance for such a policy. Most Australians have fairly positive attitudes towards helping those whom they perceive to be victims of persecution.
Posted by Winton Bates at 5:25 PM

Email ThisBlogThis!Share to TwitterShare to FacebookShare to Pinterest
Labels: Ethics and moral instincts, Frames and beliefs, politics, The good society, Why freedom?

Although most of us can appreciate the value of 'doing unto others what we would have done unto us', our ability to put it into practice is hampered by competing beliefs -

We cannot afford to take in migrants especially those who haven't 'earned' their way into this country.

Our jobs and our way of life will be threatened by 'these' people.

The issue provides a ready political grenade for any opposition party and cheap bait for the media and for this reason, it seldom gets the informed ear of the general public. Instead, it almost instantly finds and generates un or misinformed attention.

You apologize for not providing much 'insight' into this issue Winton but perhaps that's because the only real insight is the attitude of love...

PS And I don't doubt that you have plenty of that kind of insight :)

Thanks for those comments, TBT, particularly the PS.

When I look inwards at my own attitudes on this question, on the one hand there is love for fellow humans and on the other hand there are fears. I expect that is true of just about everyone.

Many fears I hear expressed are baseless and could be dealt with by ensuring that false information is challenged more consistently.

However, that still leaves the fear of being imposed upon. People have a natural desire to provide refuge for victims of persecution, but when people arrive on our shores demanding their rights under international conventions, we tend to become defensive.