Is the history of freedom of speech relevant to the current debate in Australia?

Free speech is certainly in the news in Australia. Early in the week we had the reaction to Tim Mathieson's suggestion that the best way to have your prostrate digitally examined would be to 'perhaps look for a small, Asian, female doctor'. I thought George Brandis, shadow attorney-general, struck the right note when he responded:
'I don't think we want to have in this country a culture of finger-wagging and confected outrage every time someone says something that might be better left unsaid'.

A day or so later, Nicola Roxon, the attorney-general (A-G), backed away from the 'offensive behaviour' provisions of her draft anti-discrimination bill, saying that the main purpose of the bill was to simplify and consolidate discrimination laws and that it 'has never been the government's intention to restrict free speech'. That seems to imply that inclusion of the offensive behaviour provision was due to the Minister's incompetence. I suspect, however, that the A-G knew exactly what she was doing and that she still intends to reinforce the restrictions on free speech in existing discrimination laws.

In an opinion piece in 'The Australian' on Jan. 10, the A-G suggested: 'telling a female staff member "shorter skirts would be better for all girls in the office" might well breach discrimination laws'. I am prepared to accept her word for that, but the example seems to me to raise questions about the desirability of discrimination laws that restrict speech to that extent.

Should anti-discrimination law be applied whenever men refer to their adult female work colleagues as girls (or women refer to their male work colleagues as boys, or even 'old boys') and make mildly sexist remarks about their clothing. I imagine that most males who might use words such as those quoted by the A-G would be intending to engage in good-humoured banter with female colleagues - whom they consider as equals, in the sense of being capable of 'giving as good as they get'. (Foreign readers should understand that friendly exchanges of mildly offensive remarks are a characteristic of Australian culture.) Of course, those who make sexist comments, even in jest, run the risk that work colleagues will consider their behaviour unacceptable and ask for an apology.

That is my point. In modern Australia, when people working in offices find themselves subjected to objectionable speech, they do not need to threaten legal action to ensure that perpetrators suffer humiliating consequences. The A-G apparently thinks threats of legal action are the most appropriate response to bad manners.

In the same article, the A-G suggested her aim is to 'get a tricky balance right' by ensuring that freedoms are subject to 'appropriate limits that provide protection in certain circumstances'. She gives the impression that she accepts free speech as the rule, with restrictions only to be imposed in certain circumstances. Yet, her proposed bill reverses the normal burden of proof. Those accused of discrimination bear the onus of proving that their speech has not been for alleged purposes that are contrary to the discrimination legislation. 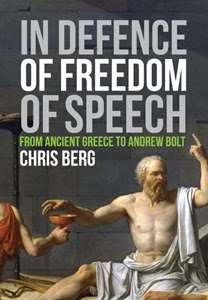 Politicians might be less keen to use the coercive powers of the state to enforce their notions of political correctness if they read In Defence of Freedom of Speech, by Chris Berg. The main point to emerge from the book is that freedom of speech is at one with freedom of thought. When governments restrict freedom of speech they interfere with the rights of individuals to express themselves. The heroes of Berg's story, Benedict Spinoza and Benjamin Constant, did not confine themselves to support for politically correct speech.

Benedict Spinoza (1632-1677) argued that the presumption should be on protecting freedom of expression rather than limiting it, even though espousal of some doctrines could have negative consequences for society. He blended two arguments for freedom of expression: the natural rights argument that the state cannot control thoughts; and the pragmatic argument that attempts to do so creates more problems than it solves. In relation to the latter point he noted that states which limit freedom find their regulations abused by interest groups seeking to benefit at the expense of others.

Benjamin Constant (1767-1830) also admitted the possibility that free speech 'may corrupt manners or shake the principles of morality', but he argued that people 'should be taught to preserve themselves from these dangers by their own efforts and reason'. Constant suggests that governments that try to enforce uniform belief encourage hypocrisy and resistance:
'To prop up an opinion with threats invites the courageous to contest it'.

Berg acknowledges the contribution to development of free speech by a range of other people. He points out, however, that many of those who have been widely quoted as supporters of free speech were only prepared to advocate freedom of speech under certain circumstances or for certain groups of people.

My only qualification about this book is that I would like to have seen greater recognition of defamation as a legitimate reason for restriction of freedom of speech. At one point, Berg suggests:
'The analogy between property and reputation is widely used but deeply incoherent'.
I disagree. Damage to the reputation of a person or business is equivalent to loss of property. This is most obvious when damage to the reputation of a public company results in a decline in its share price. In many other instances there is a loss of future earnings and/or additional costs incurred that have an assessable monetary value. It seems to me that the relevant issue in relation to defamation is whether individuals or firms have a right to expect the state to defend their reputations. Those who have unwarranted reputations for good conduct, should not have those reputations defended by the state.

Overall, however, this book seems to me to provide an excellent account of the evolution of free speech in western civilization.


Soon after this post was written, Nicola Roxon resigned from the position of Attorney-General. We will have to wait and see what that means for the future of free speech in Australia. As James Patterson has noted, the new Attorney-General, Mark Dreyfus is on the record as saying that he considers 18C of the Racial Discrimination Act - the section apparently contravened by Andrew Bolt - is a good law.

I haven't studied the Bolt case, but the judgement does seem to have muffled public discussion of the question of how aboriginality should be defined for public policy purposes. I suspect that potential commentators are now concerned that if they openly express their genuine beliefs on such matters of public interest, they might be required to prove that their remarks constitute fair comment.
Posted by Winton Bates at 11:52 AM

Email ThisBlogThis!Share to TwitterShare to FacebookShare to Pinterest
Labels: Autonomy and responsibility, free speech, Why freedom?