What determines the ability of democratic governments to cope with their responsibilities?

I ended my last post suggesting that the greatest threat to human progress over the next few decades is that democratic governments will not be able to cope with the increasing responsibilities that seem likely to be placed upon them, particularly in high-income countries.

The problem is that countries differ greatly in their ability to cope with the problems of big government – in terms of both raising revenue and managing provision of services, and implementing tax reforms etc. if that becomes necessary. Sweden seems to be able to cope with government spending that is still around 50 per cent of GDP without too many problems, whereas Greece was on the way to becoming a basket case before its government spending reached that level.

The wide variation in the effectiveness of government in OECD countries with big governments is apparent from the chart below. Size of government is measured by OECD data on government spending (General Government Total Outlays) as a percentage of GDP averaged over the five years ending 2007. Government effectiveness is measured by the relevant World Bank governance indicator which reflects, among other things, perceptions of the quality of the civil service and its independence from political pressures, and the quality of policy formulation and the credibility of the government's policy commitments. 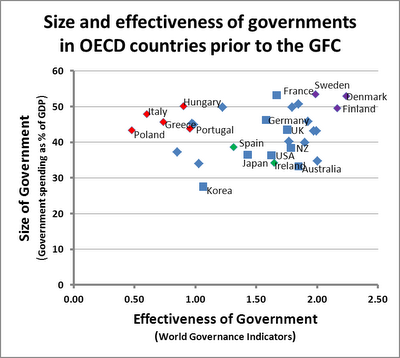 I chose the period prior to the global financial crisis (GFC) in making this comparison to see to what extent the indicator of government effectiveness predicts how countries have fared subsequently. It predicts that three of the PIIGS - Italy, Greece and Portugal - might have problems in coping, but that Ireland and Spain would be less likely to have problems. Failure to predict problems in Ireland and Spain could be attributed to deficiencies in both the indicator of government effectiveness and the indicator of size of government. In relation to effectiveness, it does not seem consistent with effective governance for bond holders of banks to be viewed as ‘consenting adults’ when the future looks rosy and then subsequently issued with guarantees when the future becomes uncertain. In relation to size of government, it could also be argued that government spending was a poor indicator prior to the GFC because it didn’t take account of the contingent liability associated with implicit guarantees for bond holders of banks. For example, in the case of Ireland, a better measure of the size of government might have anticipated in some way the subsequent increase in government spending from around 34 percent of GDP in 2006 to 67 percent in 2010.

In my next post I will consider whether John Keane’s observation that we now have ‘monitory democracy’ has implications for the relationship between the responsibilities and effectiveness of government, and hence the survival of democratic institutions.
Posted by Winton Bates at 10:24 AM