How concerned should we be about trends in income distribution?

At the end of my last post I suggested that the evidence on changing income redistribution – in the OECDs recent publication ‘Divided We Stand’ - poses some serious questions to those of us who are inclined to argue that governments can create widespread opportunities by just getting out of the way. I stick by that, but I don’t see much that is of particular concern in trends in income distribution in OECD countries since the mid-1980s.

In his discussion of Wayne Swan’s recent ravings about income distribution, Henry Ergas agreed with Swan that it is possible to avoid a rising gap between income growth of those at the top of the income distribution and those at the bottom. He noted, however, that ‘the four countries that from the mid-1980s on, most conspicuously did so’ were ‘Portugal, Ireland, Greece and Spain, usually known as the PIGS. In those countries, the bottom 10 percent’s incomes increased by about 1.7 percent more a year than those of the 10 percent at the top’.

I had missed this point when I first looked at the ‘Overview’ of ‘Divided We Stand’. When I looked at the relevant table, it seemed like a good idea to graph the data. The result is shown below. 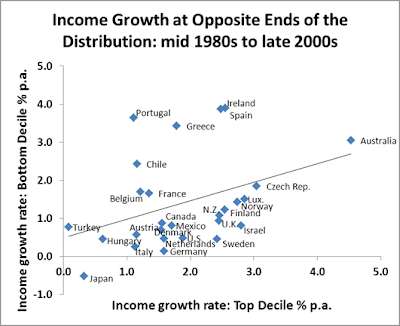 The PIGS certainly stand out for their success in achieving relatively high rates of growth for those in the bottom 10% of the income distribution. As expected, the growth in average incomes of those at the bottom of the income distribution in the United States was substantially lower than for those at the top – but the same is also true of Sweden. This presumably reflects substantial economic reforms undertaken in Sweden since the mid-1980s.

The growth in incomes for those in the lowest 10% of the income distribution in Australia looks fairly good by comparison with most other countries, and the income growth that occurred is hopefully more likely to be sustained that for the PIGS. 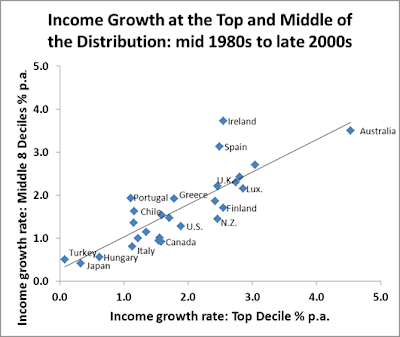 The second graph suggests that there has been a fairly close relationship between growth in incomes at the top of the income distribution and those in the middle. Given all the talk about rising income inequality in the United States, I was surprised to see that the US does not stand out in terms of incomes at the top rising much more rapidly than those in the middle. What is all the fuss about? Are the researchers who view rising inequality in the US as something exceptional looking at more recent trends? Or are they jumping at shadows?


After some further reading, I am inclined to answer my questions as follows:


1.         Most of the fuss has been about increases in incomes of the top 1% in the US. The increase in share of the top 1% was relatively large by comparison with most other OECD countries. See Figure 12 of the ‘Overview’ of ‘Divided We Stand’.

2.        Growth in incomes of the top 1% has been highly volatile in the US. See Figure 2, of the Congressional Budget Office report: ‘Trendsin the Distribution of household Income Between 1979 and 2007’.

3.      The issue is whether the increase in the incomes of the top 1% is at the expense of the rest of the population. Various explanations have been given for the rapid increase in incomes at the very top of the distribution, but I don’t think a convincing case has been made that there has been systemic market failure. With the benefit of hindsight some remuneration experiments could be counted as failures, but it would be unreasonable to expect all market experiments to succeed. Failure of particular remuneration experiments doesn’t mean that the 99% would benefit from regulation of the remuneration of the 1%, or from higher taxation of the income of the 1%.
Posted by Winton Bates at 8:25 PM

People are concerned, and justifiably so, I think, because all sectors are becoming less labor intensive as a result of automation. The return on investment in automation accrues to capital, not labor. So working folk feel left behind, because they are being left behind. The recession is another factor. All recent recessions have had a structural component, so that in the aftermath of a recession there is a "new normal." The new normal following the early 1980's recession was what Jacob Hacker called the "risk shift"--no more job security and a lot less jobs with bennies, which is a big deal here in America, where there are very few bennies in the citizenship package--it's have a job with bennies or be a truly marginalized person. I suspect the new normal following the recent recession will be recalibration of so-called NAIRU (an invention of that ruling class tool Milton Friedman) from some 6% to something like 9%. Given the well-documented pattern in the USA of discrimination by employers against the unemployed, it looks like a portion of the population has the potential to be permanently excluded from the workfarce.

It's currently fashionable for apologists for the status quo (and of course there will always be paying writing gigs for those) to be aggresively framing poverty as being defined in terms of what they call "absolute poverty." But to the extent that money is power (and it is, the orchestrated trend away from "political economy" notwithstanding) it makes a difference how many orders of magnitude there are between the incomes of workers and the incomes of owners.

Thanks for your comments, Lori.

I can understand the concerns you write about. Concerns about the effects of automation and globalization on income security are fairly common throughout the industrialized world.

I hadn't heard of 'bennies' before - but I know what you mean. The differences might be more profound in the US because of medical insurance being linked to employment, but there has also been an increase in casual employment in Australia.

The NAIRU came down gradually in Australia during the 1990s and early 2000s. I wouldn't be too pessimistic about that once macro stability is restored.

From what I know of Milton Friedman I think he would be bemused to be referred to as 'a ruling class tool'. He seemed to me to be fiercely independent.

Regarding absolute poverty versus income inequality, I really wonder how concerned people are about inequality in the US and Australia. Europeans might be different. People are concerned about the opportunities available to their own families and people worse off than themselves, but it seems to me that most couldn't give a damn how much the rich earn or how they spend their money.

I don't think wealthy people exert a huge amount of political power in Australia. The situation certainly looks different in the US (from TV coverage) - but voters still have the final say!

Unfortunately, the view I expressed above that most people couldn't give a damn how much the rich earn is contradicted by evidence discussed recently on this blog. There is some evidence that income inequality has an adverse effect on average happiness.

The Graphs which are shown in your Blog Article are very informative about the World Scenario as far as Income Distribution Trends are concerned. Thanks a lot for posting this Blog Article which can give a good idea about World Finances Management.

All of us seeks freedom to do what we want. Have our own reflections and opinions most specially when it comes to business. website to earn money