How should a libertarian view the pursuit of happiness in Bhutan?

I was pondering this question last week on my first visit to Bhutan. Some readers may wonder why anyone who loves liberty would actually need to ponder this question. It is obvious that such a person could not support a law requiring citizens to wear national dress, particularly when this law means that ethnic minorities with a different cultural heritage are expected to wear the traditional attire of the majority of the population. Nor could anyone who loves liberty support a law specifying that any person found with more than the permissible quantity of tobacco products for personal consumption ‘shall be guilty of the offense for smuggling’. 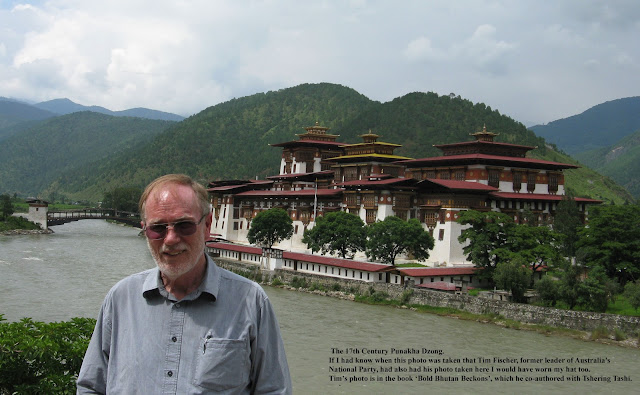 My pondering has focused on the issue of whether such restrictions of liberty are central to Bhutan’s Gross National Happiness (GNH) objective. My conclusion is that I don’t think they are. While GNH seems to be mentioned whenever the government does anything in Bhutan, restrictions of liberty seem to me to be more appropriately attributed to the historical legacy of isolation from the rest of the world, the reasons that the Druk majority have had to fear that they might lose their cultural identity and political independence, and the history of paternalistic government that is greatly respected by a high proportion of the people (and which has generally deserved that respect).

It seems to me that attributing restrictions of liberty in Bhutan to GNH would be as silly as attributing the recent riots in Britain to its Westminster system of government, or the existence of a relatively high prison population in the US to the ideals expressed in its Declaration of Independence. Principles deserve to be considered on their merits, even though the claims to moral leadership of the countries that espouse those principles are often impaired to some extent by bad policies and policy outcomes.

The following remarks of the current king of Bhutan, his majesty Jigme Khesar Namgyel Wangchuck, seem relevant in this context:


‘GNH acts as our National Conscience guiding us towards making wise decisions for a better future. It ensures that no matter what our nation may seek to achieve, the human dimension, the individual’s place in the nation, is never forgotten. It is a constant reminder that we must strive for a caring leadership so that as the world and country changes, as our nation’s goals change, our foremost priority will always remain the happiness and wellbeing of our people – including the generations to come after us’.
The GNH concept originated in the early 1970s in a remark by the former king that ‘Gross National Happiness is more important than Gross National Product’. Systematic efforts have been made over the last decade or so to specify the objective clearly, to measure GNH and to incorporate relevant criteria in government decision-making.

The central idea behind Bhutan’s GNH objective is to integrate environmental conservation, promotion of cultural activities and good governance with economic growth and modernization. This idea has gained considerable international support. The UN General Assembly recently adopted by acclamation a resolution sponsored by Bhutan inviting countries ‘to pursue the elaboration of additional measures that better capture the importance of the pursuit of happiness and well-being in development with a view to guiding their public policies’. Bhutan has been invited to convene a panel discussion on the theme of happiness and well-being during the Assembly’s next session, which begins in September.

While offering its view of the pursuit of happiness to the rest of the world, the government of Bhutan does not claim to have resolved all the problems of economic development and social change. For example, public literature about GNH acknowledges that Bhutan faces problems associated with rural-urban migration, youth alienation and substance abuse.

One possible area of concern about pursuit of GNH is whether attempts to integrate environmental and cultural concerns with economic development will reduce economic freedom and constrain economic opportunities available to Bhutanese people. I’m not sure how restrictive the project approval processes might be, but it seems to involve a weighing up of the good and bad effects of individual projects. This approach seems to me to have potential to enable approval of a larger number of good projects than would the process in Australia of requiring projects to jump a series of environmental and/or social impact hurdles imposed by different levels of government. The inclusion of a good governance criterion should also help to ensure that projects are not held up by corrupt officials or narrowly focused interest groups.

Although the Heritage Foundation’s index suggests that Bhutan has a relatively low level of economic freedom (a ranking of 103 among the 179 countries ranked) it is not clear that its ranking is adversely affected by the pursuit of GNH. Bhutan’s economic freedom ranking is considerably higher than that of neighbouring countries such as India (124), China (135) and Nepal (146) whose governments do not have GNH as an explicit objective. I don’t see why pursuit of GNH in Bhutan would not be consistent with greater economic freedom than at present. 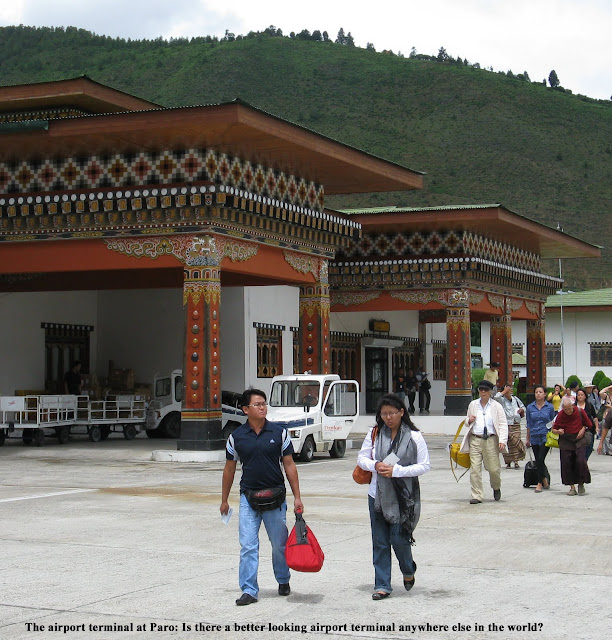 I thoroughly enjoyed my visit to Bhutan. I think it would be hard for anyone to visit the country without ending up with a great deal of respect for the peaceful people who inhabit this country. The people are so kind that the dogs even seem to feel safe sleeping on the roads. I don’t like the paternalistic restrictions on liberty in Bhutan but I think that there is a fair chance that the government will decide, before long, that such policies are actually inimical to individual flourishing and to GNH.

Hi Winton,
Bhutan looks like a beautiful country, and I agree the airport is magnificent. Great photo's.

I don't believe too many restrictions should be placed on any society, I think in the long term this does restrict room for growth not only in the country involved but for the individual as well.

Also I cannot see how a National Happiness can be achieve if their is a lot of restrictions applied. I feel Australia is starting to come under the "too many restrictions" category, it's not good to see.
(Mags from Bigbond)

I think you are right Mags. I can understand why a paternalistic king would have wanted to ensure that exposure to the outside world did not disrupt the many good things in Bhutanese society, but in my view happiness does depend ultimately on individuals being able to take responsibility for running their own lives.