How close is the link between freedom and life satisfaction?

I think individual autonomy should be viewed not just as a factor contributing to human flourishing but as a factor that is integral to it in the same way that good relations with other people and a feeling of competence are also integral to human flourishing. It seems to me that the nature of humans is such that they cannot achieve their individual potential for psychological growth and enjoyment of life unless they have control of their own lives.


That judgement is not beyond dispute. For example, Richard Kraut has suggested that individuals may sometimes benefit from being coerced to prevent them from harming themselves. I considered that argument here.

In this post I want to consider another possible argument against autonomy, namely that some people may prefer to have their autonomy restricted because they have difficulty in coping with a great deal of freedom of choice and control over their lives. There is some experimental evidence that beyond some point an increase in the range of options may make it more difficult for consumers to make choices – they may even prefer not to make a choice if the choice set is too large. Does this mean that people have less satisfaction with their lives when they feel they have a great deal of choice and control over the way their lives turn out?

No! At least that is the answer suggested by the research of Paolo Verme, using a large data set drawn from the World and European Values Surveys (‘Happiness, Freedom and Control’, 2007). Survey respondents were asked to rate on a scale from 1 to 10 ‘how much freedom of choice and control you feel you have over the way your life turns out they had over the way your life turns out’ where 1 means ‘none at all’ and 10 means ‘a great deal’. When this ‘freedom and control’ variable was included in a statistical analysis to explain life satisfaction it was shown to be more important than other significant variables, including subjective health and income.

I have done some research of my own using data from the 2005 World Values Survey to explore the relationship between ‘freedom and control’ and happiness and life satisfaction. The charts shown below have been constructed using data from about 80,000 respondents in 57 countries. In each chart the sum of the columns in the depth axis (happiness or life satisfaction) is 100%. So, for example, looking at Figure 1, you will see that the percentage of people who are ‘quite happy’ is higher than those who are ‘very happy’, ‘not very happy’ and ‘not at all happy’ irrespective of perceptions about freedom and control. The chart suggests, however, that people are much more likely to say that they are very happy when they perceive that they have a great deal of freedom of choice and control. 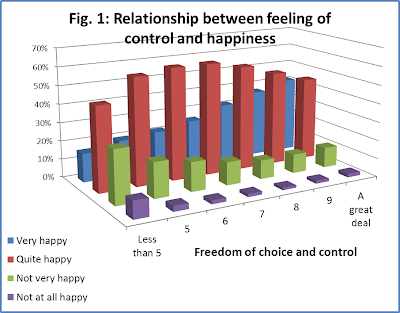 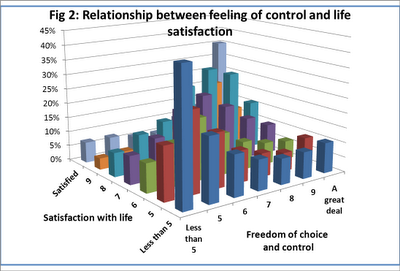 A comparison of Figure 1 and Figure 2 suggests that there is a much stronger relationship between ‘freedom and control’ and life satisfaction than between ‘freedom and control’ and happiness. This makes sense to me. A well-treated slave might say that she is quite happy, even though she has little freedom, but she would be much less likely to say that she is satisfied with her life.

In case anyone is wondering, as discussed here, there is evidence that perceptions of freedom or choice and control from the World Values Survey are correlated with more objective indicators of freedom.
Posted by Winton Bates at 5:05 PM

Email ThisBlogThis!Share to TwitterShare to FacebookShare to Pinterest
Labels: inner freedom, What is happiness?

'...perceptions of freedom or choice and control from the World Values Survey are correlated with more objective indicators of freedom.'

Yep, our beliefs determine how we experience and act on the world.

That distinction you make between happiness and satisfaction is a really interesting one. The way I see it, it's possible to feel happy while still wanting more in life. Would I describe this 'wanting more' as a dissatisfaction??? Hmm...perhaps but it would be a nice kind of dissatisfaction :)

I agree, TBT. It is possible to feel happy while still wanting more from life.

It is interesting to think of this in terms of Maslow's hierarchy of needs. Maslow thought that once basic needs were satisfied people would naturally move on to satisfy higher needs. Some do and some don't.

It may depend on what satisfaction of their basic needs means to them. For example, if they think eating makes them feel happy they might interpret their unease as a signal to eat more. So they could stay in deficiency mode and just keep on eating more and more.

If they think that satifying basic needs means that they can now move on to satisfy other needs, they are more likely to interpret their unease as a signal to give higher priority to hobbies, or helping other people, or whatever their goals in life might suggest. Perhaps they could spend more time meditating so the unease/dissatisfaction will go away. But I understand that takes several lifetimes:)

Hmm...I'm not so sure about requiring lifetimes...There are many things that I once thought were necessary/*basic* for my safety and wellbeing but which I no longer do.

However, if you're referring to things such as water, food, air and shelter as the kinds of basic needs that may take lifetimes of meditation practice to dispense with, well, perhaps, although I've no inclination to attempt it :)

There is something that I've wondered about from time to time, though, and that is whether, in fact, our *basic* needs are changing or expanding as we've evolved.

I guess what I'm saying is that Maslow's bottom rung is a given (for people in more affluent societies) and is therefors more of a *constant* than a variable.

I'm not exactly sure where I'm going with this but it's something that has often made me wonder if Maslow's HON needs to be updated???

I also regard internet access and a mobile phone as basic needs, TBT.

From a physiological standpoint, Maslow has to be right that humans need food and shelter for survival. Such needs do have priority, but not as much as I expected.
As I discussed here the world's poor - those living on less that one or two dollars a day - spend a significant proportion of their income on entertainment. Apparently living means a lot more to these very poor people than just survival.