Over the past year I have read five or six books about progress. Matt Ridley’s book, ‘The Rational Optimist’ (discussed here and here) was the most optimistic. Ronald Wright’s book, ‘A short history of progress’, is probably the most pessimistic.

Wright’s book has the virtue of being short and easy to read. His message is that past civilizations have generally failed and that we are making the same mistakes. He notes that we have the advantage of knowing where those past societies went wrong. As you might guess, however, he suggests that we haven’t got much time to mend our ways. He says that if we don’t act now, ‘this new century will not grow very old before we enter an age of chaos and collapse that will dwarf all the dark ages in the past’ (p.132). Wright’s book was published six years ago, so if his analysis is correct the age of chaos and collapse will soon be upon us. 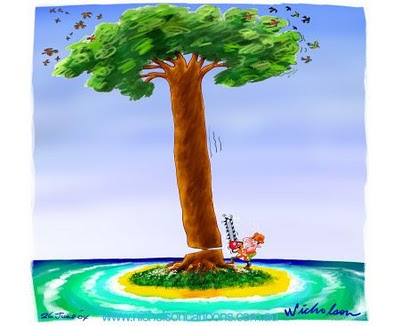 Cartoon by Nicholson from "The Australian" newspaper: http://www.nicholsoncartoons.com.au/

Anyone interested in a summary of Wright's book will not find it too difficult to find one elsewhere. What I want to do here is to attempt to identify what makes Wright so pessimistic about the future of civilization.

An obvious starting point is his view of human nature. Wright doesn’t believe in the innate goodness of humanity. He suggests that ‘prehistory, like history tells us that we are at best the heirs of many ruthless victories and at worst the heirs of genocide. We may well be descended from humans who repeatedly exterminated rival humans – culminating in the suspicious death of our Neanderthal cousins some 30,000 years ago’ (p. 31). Furthermore, an inability to foresee – or to watch out for – long range consequences of our actions may be inherent in our kind (p. 108). We are doomed by hope. Hope drives us to invent new fixes for old messes, which in turn create ever more dangerous messes (p. 123). Homo sapiens is still ‘an Ice Age hunter only half-evolved towards intelligence; clever but seldom wise’ (p. 132).

Wright acknowledges that humans have been influenced by culture. In fact, he suggests that culture is a key to our success: we are ‘experimental creatures of our own making’. Yet culture also poses risks to us: ‘As cultures grow more elaborate, and technologies more powerful, they themselves may become ponderous specializations – vulnerable and, in extreme cases, deadly’ (p. 30). He describes this as a ‘progress trap’. The wreckage of past civilizations litters the earth because their populations grow until they hit the bounds of food supply, while the concentration of wealth and power at the top of large scale societies gives the elite a vested interest in the status quo.

According to Wright’s view, all large-scale societies are locked into some kind of path dependency – leading them to outrun natural limits and collapse. How then does he explain the success of modern civilization despite all the failures that have occurred in the past? His explanation seems to be that nature has been forgiving. When societies failed there was natural regeneration and human migration to lightly settled areas. Civilization has been exceptionally long-lived in Egypt and China as a result of ‘generous ecologies’ - extra topsoil brought in from elsewhere by water and wind.

I think Wright’s pessimism stems from his views on both human nature and culture. His model doesn’t seem to recognize that humans have biological instincts that encourage cooperation and that this enables rules of conduct to evolve to meet changing circumstances. His model fails to take account of cultural evolution. Our ancestors may have helped destroy mega-fauna through their hunting practices, but hunting and gathering rules evolved in the more successful societies to avoid wanton destruction of valuable resources. Further rules followed including those relating to ownership of animals, grazing rights, land ownership etc. – all serving to encourage more efficient use of scarce resources.

Whether societies collapse or survive and prosper depends largely on the rules they live by. People in advanced western societies live by rules that have evolved to encourage mutually beneficial exchange, specialization and innovation, to ensure valuable resources are not wasted and to avoid environmental degradation.

Is modern civilization locked in to a path that will lead to chaos and collapse if we don’t immediately mend our ways? I don’t think so. Once the hyperbole about running out of resources is cleared away, the only real concern that remains in my view relates to environmental pollution that cannot be controlled by any one government acting alone. Even here there are grounds for optimism. Despite their many failings, the governments of major countries show enormous goodwill toward the future of humanity. We can be reasonably confident that concerted international action will be taken if a major environmental catastrophe ever actually threatens the future of humanity.
Posted by Winton Bates at 5:00 PM

Thanks very much for this sensible and cogent analysis. All the misanthropes who vilify humanity seem blind to the way MOST people behave MOST of the time.
(An extended argument along the lines of yours can be found in my 2009 book, The Case for Rational Optimism; see http://www.fsrcoin.com/k.htm)

Thanks Frank. I will look for your book.

Hi Winton,
I personally don't think all past civilizations have failed at all. The knowledge that some ancient city's have had are unbelievable. Yes some have failed, but not all.

I think mankind is achieving a lot. As time goes on we are creating better things with new technology, and this seems to be moving fast. Yes things will be more of a challenge as the earths population gets bigger, but it can all be handled if done right.

A big problem that I see anyway, is the way that Governments are handling this population growth of the earth. They all seem to worry more about money than they do the people, and if anything, I feel the Governments can easily destroy a lot of things.

Hi Mags. I'm sorry about the delay in responding.
The 'problem' of high population growth rates seems to solve itself as per capita incomes rise. Population pressure is only likely to remain a problem in countries where institutions are unfavourable to economic growth.