At this point some readers will immediately want to bring in complications like the possibility of irrational behaviour. A branch of economics (behavioral economics) explores this possibility, but I want to put this possibility aside for the moment.

The question I want to focus on is whether well-being surveys that are conducted by asking people questions relating to their personal well-being are measuring the well-being or utility referred to by economists. Some economists assume that it is, but I think they are mistaken.

What is it that the surveys actually measure? They measure a variety of different things. Most commonly they measure happiness or satisfaction with life by asking people to provide numerical evaluations in response to a single question. Some more complex surveys (e.g. the ACQOL survey) measure perceptions of the quality of life by asking questions about satisfaction with various aspects of life such as standard of living, achievements, relationships and health. Others ( e.g. nef’s “National accounts of wellbeing”) incorporate a framework of questions relating to life evaluations, emotional well-being, vitality, resilience and self-esteem, and feelings of autonomy and competence etc.

I think it is fair to say, however, that the surveys measure how people feel about their current lives. (Some do include questions about future security but when this averaged with other factors most weight is given to how people feel about their current lives.) For the purposes of this discussion let us call this “current well-being” and assume that the surveys measure it accurately.

At this point the economists reading this will immediately recognize that the surveys cannot be measuring utility because people often make trade-offs between their current well-being and future well-being. This is most obvious in savings decisions where current consumption may be sacrificed to enable a higher consumption levels to be enjoyed in future. It also occurs, for example, when people decide to put up with working long hours or spending a lot of time commuting in order to make their families more financially secure.

Economists still probably learn at an early stage of their study of the subject how to picture these kinds of choices in their minds, but for the benefit of anyone else who might be reading this I will draw a relevant diagram below. Readers who prefer stories to diagrams might prefer to read an earlier post, entitled “Do good decisions always make us happy?”. For the benefit of any readers who might find an appeal to authority more persuasive I should also mention that Gary Becker and Luis Rayo have suggested that the happiness measured in surveys can be viewed as “a commodity in the utility function in the same way that owning a car and being healthy are” (comment on Stevenson/Wolfers paper, Brookings Papers, Spring 2008: 89). 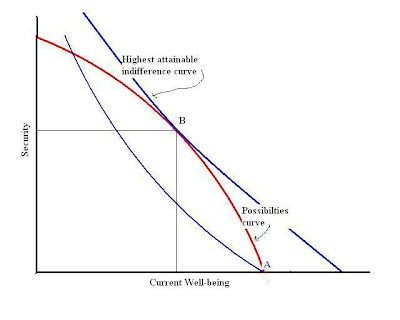 The possibilities curve in this diagram (shown in red) encompasses the various combinations of “current well-being” and “security” that are attainable by the decision-maker. It can easily be seen that points on this curve are superior to all attainable points closer to the origin.

The point I am trying to make is that as a result of the decision-maker’s preferences she views point A, where current wellbeing is at a maximum, as inferior to point B, the point at which utility is maximized.

The obvious implication is that it is foolish to rush into policy recommendations based solely on consideration of how people can improve their well-being as measured in surveys. If happiness surveys suggest that people are behaving in ways that are contrary to measured well-being we should ask ourselves whether we have an adequate understanding of what is motivating their behavior, rather than assuming that it is a result of ignorance (an information problem) or human frailty (predictable irrationality).
Posted by Winton Bates at 3:46 PM

Email ThisBlogThis!Share to TwitterShare to FacebookShare to Pinterest
Labels: Rationality of behaviour, Well-being and utility

Good essay- but I think you might have ignored the mistakes in rational choice theory such as the soci-cultural context and altruistic behavior. When survey and market behavior are studied tandem, they can make a fuller picture of "utility"

Thanks Lance. You raise an interesting point.

My defence is that I was just using economic rationality and utility maximization as a metaphor to suggest that seemingly irrational behaviours can, in fact, be rational. I think this is a useful thought experiment even though this robotic rationality of rational economic man does not have a great deal to do with actual human behaviour. I discussed some of the issues
here.

I agree with you that information from surveys and market behaviour are both relevant in considering why people do what they do. I think identity economics may make a useful contribution in bringing into account some of the relevant socio-cultural factors.