Should we choose eudaimonia over hedonia?

Last week my attention was drawn to the findings of some recent research, led by Barbara Fredrickson, which suggests that eudaimonia – which can be described in broad terms as a sense of wellbeing associated with a noble purpose or engagement in meaningful activities - provides positive health benefits in protecting against a variety of human ills, including arthritis, heart disease and viral infection. By contrast, the study suggests that hedonia – a sense of happiness associated with pleasure, satisfaction and self-gratification – has the opposite effects.

The findings are noteworthy because previous research has suggested that both eudaimonia and hedonia are associated with improved physical and mental health outcomes. I feel more inspired than surprised by the findings. Like many other people I was brought up to believe that a noble purpose can be protective, but in adult life I viewed that as more a matter of faith than anything else. It is interesting to learn there may be a scientific basis for such beliefs.

The research combined psychology tests to determine the nature of happiness experienced by 80 healthy adults with a health check and test of blood samples to assess gene expression associated with chronic stress and antiviral responses. Barbara Fredrickson is a psychology professor at the University of North Carolina. On this project she collaborated with a team led by Steven Cole, professor of medicine and psychiatry, at the University of California. (The research findings have been published in PNAS.)

Like previous studies, this study indicated that there is a relatively high correlation observed between eudaimonic and hedonic indicators of happiness (r= 0.79). People who score highly in terms of eudaimonic happiness tend also to score highly in terms of hedonic happiness, and vice versa, but there was nevertheless sufficient difference to enable the impacts of eudaimonia and hedonia to be disentangled.

The authors’ conclusion is a bit complicated, but it seems to be implying that if the ‘good life’ means a long and healthy life, then eudaimonic wellbeing is superior to hedonic wellbeing.

However, there are some important qualifications noted in the discussion:
‘In interpreting these results, it is important to note that hedonic and eudaimonic well-being are not mutually exclusive approaches to happiness, nor do they represent a simple typology or a tradeoff. Both types of well-being share some common sources (e.g., perceived social connections) and can reciprocally influence one another [i.e., positive affect predisposes people to find positive meaning, and finding positive meaning increases positive affect]. As such, the current finding that a purified index of eudaimonic well-being (purged of shared variance with hedonia) predicts a more favourable pattern of gene expression than does a purified index of hedonic well-being (purged of shared variance with eudaimonia) says more about which form of well-being one would not want to do without, rather than which form one would be better to avoid. For people in whom one form of well-being outweighs the other, striving predominately toward meaning may have more favourable effects on health than striving predominately toward positive affect per se’. (References to cited works have been omitted from the quote.)

I struggle to understand what some of that paragraph means – the findings of the study seem to me to suggest that some kind of trade-off between eudaimonia and hedonia must be involved, despite the existence of complementarity. The issues involved appear a little clearer, however, when I bring my training in economics to bear and think in terms of a possibilities curve that surrounds all the combinations of eudaimonia and hedonia that it might be possible for an individual to achieve. 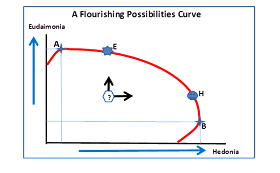 I have drawn the possibilities curve to depict a trade-off between hedonia and eudaimonia at most of the attainable points (i.e. between A and B) but allowing some regions where single-minded pursuit of either hedonia or eudaimonia might result in inferior outcomes. I draw the curve as concave to the origin over most of its length because I imagine that the eudaimonic benefits we can obtain by sacrificing a unit of hedonic benefits would tend to diminish as we sacrifice more and more hedonic benefits. My reasoning is that there are likely to be diminishing returns to devoting time both to activities that produce high hedonic benefits and activities that produce high eudaimonic benefits. I expect that single minded pursuit of hedonia might be counterproductive for the same reason that J S Mill argued that happiness cannot be obtained by seeking it (as discussed here previously). And I expect that single minded pursuit of eudaimonia might be counterproductive for the same reason that Aristotle argued that we need amusement – ‘for amusement is a sort of relaxation, and we need relaxation because we cannot work continuously’. (That comes from the passage in Nicomachean Ethics Book X, where Aristotle suggests that it would, indeed, be strange if amusement was your purpose in life and you were to take trouble and suffer hardship all your life just in order to amuse yourself.)

The sentence in the paragraph quoted above about the findings saying more about ‘which form of well-being one would not want to do without, rather than which form one would be better to avoid’, seems to envisage a person who is at a point inside the possibilities curve, such as the point at the question mark. A person in that position might be considering whether to seek to become happier by moving in the direction of point H or point E.

I should emphasize that the possibilities curve I have drawn is based mainly on my speculations and may not be related to what Barbara Fredrickson and her colleagues have in mind.

However, I think my diagram may have some value in considering the information and practical wisdom we need to make sensible decisions about how we live our lives:


My final point is the same as the point I made a few years ago in discussing whether J S Mill was correct in his rejection of Jeremy Bentham’s claim that pushpin is a good as poetry. There doesn’t seem to me to be much point in arguing whether eudaimonia is or is not superior to hedonia. The important issue is about obtaining balance in one’s life.
Winton Bates at 7:30 AM
Share